“The fairies really own this house
or so the children say,
In fact, they all of them moved in
upon the self same day.”

Originally intended to provide an adequate storage capacity for a basic water supply for Thorpeness village.

Constructed by Braithwaite Engineering Company of London in 1923, it presented Thorpeness Estates with the difficult task of deciding what could be done with such a hideous structure on the skyline. Glencairne Stuart Ogilvie with F. Forbes Glennie (architect) & H. G Keep (works manager) brilliantly disguised it as a house and from miles around one can see what appears to be a cottage lodged in the trees, 70ft high. This cottage is in fact only the top part of the building which housed the water tank. It had a capacity of 50,000 gallons and was capable of pumping 1800 gallons of water an hour from a well in the re-erected Aldringham Mill with sufficient wind or a petrol engine used as an auxiliary power source in periods of calm. The supporting steel structure was boarded in to provide unique living accommodation below the tank.

The house is very sturdily built although it may seem the opposite, the waterboarding providing protection against the elements and retaining the heat. The colouring is both decorative and practical. The many tiny windows providing good light, ventilation and beautiful views. The amount of accommodation is generous, originally having 7 bedrooms and 2 reception rooms. Now there are 5 bedrooms and 3 bathrooms plus the splendid “room at the top” from which the tank was removed in 1979. This was achieved by unbolting the 4ft x 4ft square sections and lowering them to the ground with the aid of the pulley on the north side of the house. The building has 68 stairs, which may sound daunting but the ingenious staircase provides a small landing in between each floor making it very easy to cope with.

From 1923 – 1938 the tank was looked after by William Knights. The only entry to it was via a set of horse shoe shaped irons inserted into the outside wall of the west side chimney stack, entry being something of a risky business.

In 1943 while firing at a low flying V1 flying bomb, an English Bofors shell passed through the S.E. corner of the tank causing extensive damage. At the time the two Miss Humphreys were in occupation and asleep below, neither lady woke up. Repair of the tank was carried out by reducing the size of the tank down to 30,000 gallons capacity using the top 4ft x 4ft sections.

In 1953 the petrol engine was replaced by an electric pump.

In 1963 an area water supply was introduced and pumping from the mill well ceased. The tank was used for storage only.

In 1977 the use of the tank for storage purposes was discontinued and following the enforced liquidation of Thorpeness Estates the property passed from Ogilvie family into private ownership.

In 1987 the repair, redecoration and reburbishment of the interior of the building and the rescue of the garden commenced.

The house was designed in particular for Mrs Malcolm Mason, a close friend of Ogilvie’s (he later called her his “lady of the stairs and starlight”). She was a writer of childrens books, which probably explains the fairy tale quality of the House. At first it was to be called the Gazebo, however Mrs Mason christened it The House in the Clouds, which seems to symbolise the fantasy feeling of the village. 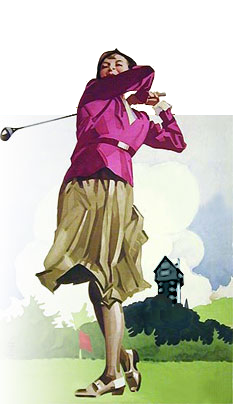